Young men on the Bromford estate in east Birmingham are smart. They know that people describe their neighbourhood as ‘the slum’. They know that they live on the ‘edge’ in a ‘forgotten’ community even though the estate is only 4 miles from Birmingham’s gleaming city centre. They know that as the so-called ‘NEETs’ of populist political discourse they are seen as exemplars of what British Prime Minister David Cameron has called ‘broken Britain’. They know that they are viewed as ‘insignificant’ and yet…..And yet they rise above de-contextualised judgements, dismissals and stigmatising as the radical and articulate message they have sprayed onto the Bromford Dreams graffiti cube demonstrates. Their experience and my walk with them over the last 18 months raises questions for people of faith – questions about power, about priorities, about faith, about incarnation, about discipleship. 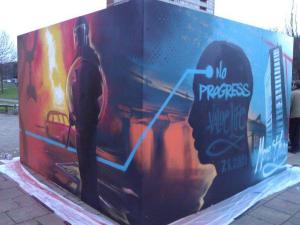 Within the Christian Gospels Jesus sides with the young men from Bromford and with all who are seen as ‘insignificant’. He ‘prioritises insignificance’ as he makes friends with those whom devout people of faith ignore or judge – the widow, the child, the prostitute, the leper, the Samaritan, the woman at the well in Sychar. Those considered ‘insignificant’ become exemplars of the God’s Kingdom, symbols of truth, faith, love and liberated living. In his Beatitudes in Matthew 5 Jesus flips our priorities upside down [or perhaps the right way up!]. In a series of ‘liberative reversals’ he makes it plain that it is the poor, the hungry, the humble, the persecuted, those who live on the edge working for peace and righteousness who are ‘blessed’ by God rather than the rich, the powerful and the included. Within the Christian community much is often made of Gods ‘bias to the poor’. We talk and talk but rarely do we walk the walk.

The ‘bias to the poor’ which Jesus embodies demands a decision on the part of those who try and follow him. They are challenged to take on a ‘preferential option for the poor’. However that’s not enough. It can be too distant, too easy to equate to campaigning to end unpayable global debt or to persuade politicians to introduce a living wage. Both are vital but both can objectify the people I have got to know in Bromford. Both perspectives narrow down exclusion to economic poverty or political powerlessness. We need to move further and recognise with Iris Marion Young that oppression has many faces. People are dismissed and oppressed because they are considered to be of no worth, to be insignificant. The Bromford Dreams graffiti cube reminds us that when the edge meets the centre amazing things can happen that lead to the liberation of both the powerless and the powerful. What then might it mean where you live to ‘prioritise insignificance’? Try it and see what happens…..