Recently I posted a reflection on the makeshift chapel that Eritrean and Ethiopian Christians in the refugee/migrant camp in Calais have built….I’ve just updated and extended it a little.

It’s now on the Coventry University Research Blog….Click here to carry on reading

Yesterday I posted a short reflection on the ways in which our response to the crisis in Calais and our attitude towards the women and men who have been forced to call ‘the jungle’ home.

The vitriolic language surrounding the asylum seskers and migrants living in the camp in Calais continues unabated but the symbolism of the chapel at the heart of the Calais ‘jungle’ is a reminder of our common humanity and of the refugee Christ who lives there in solidarity with those who cry out.

For those interested in reflecting further on migration, asylum and religious faith here is a useful resource from The Vatican. Written in 2013 but more relevant than ever this summer – click on the link to access the report – ‘Welcoming Christ in Refugees and Displaced People’. 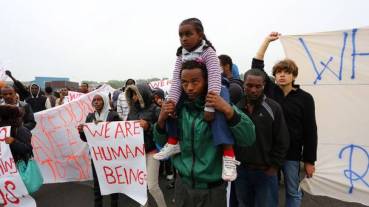 A young man called Alpha from Mauritania is living in a makeshift hut in an overgrown area referred to as ‘the jungle’ near the port of Calais. Like countless thousands across the face of the earth he is fleeing persecution. He is looking for sanctuary. In response to David Cameron’s dismissal in July of such women and men as a ‘swarm’ Alpha told a BBC reporter, ‘We are not locusts, we are human beings.’  A simple statement that seems to have escaped the headline writers of many British tabloid newspapers like The Daily Express – ‘Send in the army to halt migrant invasion.’ [30/7/2015]. The inconvenience caused to holiday-makers who’ve had delays before catching the Eurostar and the apparent ‘easy life’ everyone enjoys in Britain seem to have been uppermost in politicians minds. Other journalists however, like David Aaronovitch in ‘The Times’ have taken a different view – ‘As millions worldwide were displaced we looked the other way’ and, as Alan Travis in The Guardian noted ‘the only migrant madness’ is in the tabloids, complete with xenophobic language about so-called ‘invasions’. A more reflective response is found in a piece written by researchers Tom Davies, Arshan Isakjee and Surinder Desi’s entitled ‘Is this really Europe?‘. The report describes the conditions in ‘the jungle’ and reminds of two important facts that have been conveniently forgotten in the media feeding frenzy – [1] The vast majority of the 137,00 migrants and asylum seekers who have made it to Europe this year settle in Southern Europe – only 3,000 are currently living in Calais [2] The language of much of the media is misleading – Some of the people in ‘the jungle’ may be migrants but it is also true that many are asylum seekers fleeing persecution.

The Hebrew and Christian scriptures speak a lot about ‘strangers’. These are words that appear to be lost on many of our politicians – ‘Treat the foreigner living amongst you in the same way as people born in your land. Love the stranger as you love yourself for you were once strangers in Egypt’ [Leviticus 19:34] and again – ‘Show hospitality to strangers for by doing so some people have entertained angels unawares.’ [Hebrews 13:2]

Amidst shrill calls for more dogs, razor wire and soldiers a remarkable ray of hope has emerged in the camp in Calais. Christians, largely from the Horn of Africa, have built a makeshift church [a mosque and a school have also been built]….the chapel in ‘the jungle’ has become a symbol of solidarity and of Christ’s presence as a stranger amongst and as one of those whom the Prime Minister calls a ‘swarm’. Giles Fraser has referred to the church as a ‘place of raw prayer and defiant hope.’ [the BBC’s Songs of Praise will come from the camp chapel on 16th August].

Calais calls us to recall our shared humanity and to remember that ‘migration is not a crime’. What does our rejection of sisters and brothers say about us? Nick Cohen suggests that ‘If you hate the migrants you hate yourself.’ Stark words maybe but I believe he hits the nail on the head. In denying the humanity of the women and men in Calais we diminish our own humanity. In demanding higher fences we turn our backs not only on our interwoven world but on our better selves. Our shared humanity in this interconnected but fragile age combined with a commitment to what the sociologist Paul Gilroy has called ‘planetary humanism’ and a recognition that, made in the image of same God we are all precious can perhaps begin to draw the poison from ongoing toxic debates about migration, multiculturalism and our common future.